Deprecated: Hook elementor/widgets/widgets_registered is deprecated since version 3.5.0! Use elementor/widgets/register instead. in /home/obscomegyz/www/wp-includes/functions.php on line 5758
 A MOTIVATED TEAM - Breton Organization of Selection
Skip to content 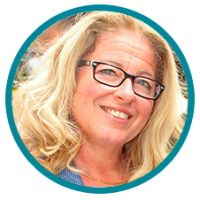 “The OBS has been developing its know-how in varietal creation and seed production for half a century. Originally, we worked in Brassica and Allium because of our location: our Breton cooperative works for the producers of the Prince de Bretagne brand located in the heart of the first French vegetable production zone, home to the selection of cauliflower and shallot crops. In the 2000s, we set up creative programs for species with high-profile PDOs such as Roscoff Onion or Coco de Paimpol. In addition to these experiments, we have introduced a program like artichoke, for which we are the only French player to develop new varieties on this difficult species. As such, we play an important role in maintaining the national collection and genetic biodiversity.

Our objectives are to bring disease resistance to the varieties of terroirs: reducing inputs is a major challenge of the 21st century and varietal creation is an important lever to achieve this.

The OBS is a good example of a development: when it was created, it was managed as a farm, all trials were harvested and marketed on the fresh market. But our administrators have been able to invest and today we have modern and efficient tools in both in vitro culture, pathology and experimentation. We are the market leader in cauliflower seed in Brittany with an exceptional rate of varietal renewal. Thanks to our know-how and our equipment, we can expand our field of activity. We have thus created OBS Innovation, a subsidiary within which we have grouped all our Research & Development tools to be more efficient.

It’s a human-sized business, and it’s a great place to live, because a lot of my colleagues have worked their whole careers at the OBS and have invested in creating what we’ve become. Today, the company is renewing itself but we are vigilant to the transmission of knowledge and we recruit with periods of accompaniment by important seniors. This mix of generation creates an interesting dynamic.” 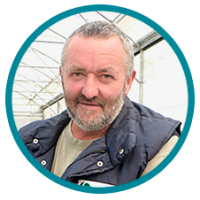 “For 35 years at the OBS, I have experienced the various changes in the company:

In the 70s and 80s, we went to the field to collect barbs to make cuttings, hard work and very physical for a very random result. The gradual transition to in vitro cultivation of cauliflower apples has very quickly led to an improvement in our results and also in our working conditions.

An extremely important moment for the company was the transition from farm varieties to hybrid cauliflower varieties. The gain for producers has been phenomenal, and I think we wouldn’t be the first region of production without this revolution.

Cropping tools have also evolved well: tunnels covering up to 10 ha were very fragile and labour-intensive. They have been replaced by multi-chapels that are much more resistant and give better working conditions.

The development of an above ground heated area allows us to work against the season to speed up selection cycles.

In 35 years, working conditions have improved considerably, less physical but much more technical. Climate management tools and IT have revolutionized my business.” 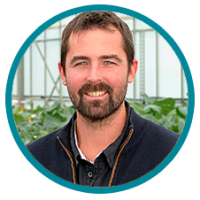 “Entering 2008 as a technician of varietal creation, I work as a breeder since 2015 after training at the University of Wageningen in the Netherlands. This experience made possible by the OBS allowed me to meet breeders from all over the world and share our vision of the selection work.

Yield, conservation and ease of harvesting are all issues that we must take into account in our day-to-day work. The desire of consumers to find healthy products on their plates and the gradual disappearance of plant-health products, encourage us to incorporate natural resistance or tolerances to diseases and pests into new varieties. The contribution of new technologies around life such as molecular or cellular biology speeds up the selection process and makes us more efficient in our work. This long and difficult process is facilitated by the dynamic cooperation of all national and local actors such as Inra, the Vegenov, experimental stations or the Chamber of Agriculture. Our position within the Breton vegetable sector gives us the opportunity to exchange with producers and to test our varieties in different places and conditions of cultivation.

In charge of the short cycle cauliflower and Allium breeding programs, my mission is to select productive but more rustic varieties. The impending arrival of traditional shallot varieties resistant to mildew highlights the expertise of the OBS to use the natural resources available to it.” 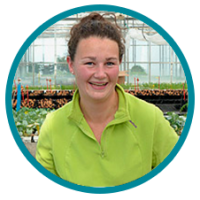 “Since 2015, I have been in charge of production management at the laboratory and greenhouse level.

Having an initial training in laboratory, I worked for 3 months with the person who previously managed the breeding of plants in order to train me. The challenges are numerous because it is necessary to adapt to unforeseen circumstances, adapt schedules and manage priorities in order to best meet the expectations of the breeders. Being of a combative nature and practicing martial arts I like to face these daily challenges. Managing the two units, lab and greenhouse, helps me get a global view of the entire production, so there is no middleman and it saves a lot of time.”

“My job is to create new varieties with qualities that meet the expectations of the producer or customer who asks us. The selection work on a species such as artichoke is complex, due to its genetics and the limited research and resources available. The work as a supplier must respond effectively and precisely to the specifications and requests, while at the same time providing the knowledge of the company and the selector. Years of field assessments, greenhouse crossings, laboratory studies are needed to create a new variety of high-performance artichoke or carrot. This work requires a high degree of rigour, but it also makes room for creativity within a dynamic spirit of constant innovation. Creating new varieties is a long-term job that requires a strong personal investment and effective teamwork.”